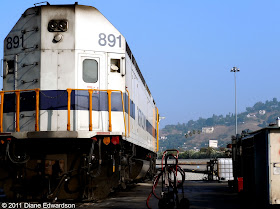 Photo: Diane Edwardson, October 15, 2011.  On average, twenty-nine Metrolink diesel locomotives can idle for hours, daily, at the maintenance yard a few hundred feet from homes and a rec center.  (Click on photo to enlarge.)﻿
Last night, a standing room only crowd of neighbors from Cypress Park and Elysian Valley filled the conference room at Dickerson Employee Benefits to meet with representatives of Metrolink, Air Quality Management District (AQMD) and elected officials at a community meeting sponsored by Assemblymember Gil Cedillo's office and the Elysian Valley Neighborhood Council.

Officials got an earful of issues about noise from locomotive engines, bells and horns at all hours, as well as air quality and health issues from cumulative exposure to diesel exhaust of the idling trains.  There were many thoughtful questions as well as suggestions for making improvements ranging from cutting edge technology for muffling sound and air filtration to lower tech solutions like sound walls and plugging into a stationary power source like they do at the Port of LA (rather than idling engines at all hours).

Neighbors said they deserved the same kind of respect shown to neighbors of the Port  of LA, with the recent improvements to control diesel emissions there.

Neighbors asked if Metrolink had done a cost analysis of plugging into a stationary power source, rather than wasting fuel by idling engines.  Metrolink had not.

Neighbors talked about the trains idling at all hours.  In one instance, an Elysian Valley resident played video recording of a train that idled for 16 hours one Sunday, with its train horn sounding constantly at over 70 decibels (as measured in Elysian Valley).  The Metrolink representative admitted that length of idling for one train was unacceptable.

Another neighbor presented compelling evidence of the health effects of cumulative exposure to the pollution created by the maintenance yard.  Many neighbors also spoke of their breathing problems, like asthma, after a lifetime of exposure.  One young man said the healthiest four years of his life were the years he went away to college.  Other young neighbors echoed that sentiment.

Representatives from the AQMD said air quality complaints can be directed to 1-800-CUT-SMOG.  Metrolink did not have a phone number for complaints about noise or other such issues.

Metrolink committed to another meeting with the community after the holidays to give them time to research possible solutions to the community's questions, including a phone number for complaints - particularly for weekends and nighttime noise complaints.

Learn more about the neighborhood coalition working to limit the air and noise pollution at the Metrolink Maintenance Yard: http://lametrolinkpollution.com/index.html.